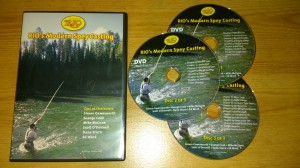 Modern Spey casting has become the most used fly casting method in the world today. Originally developed in Scotland it has now circumnavigated the world and is the birthplace of most of the modern casts used today on both single and double-handed rods. If you can master the Spey cast you can go on to master any modern cast today. This DVD by RIO is a great place to start on your way to becoming a Spey master caster.

Divided into 25 chapters over 3 DVDs this pack covers every aspect of Spey casting you will ever need. The cast of characters in the DVD are easy to follow and very likable. Simon Gawesworth born in England started fly fishing at 8 years old and was a world champion at the age of 16 he went on to become an instructor.

After meeting Jim Vincent co-founder of RIO products he was employed in the company. Together Simon and RIO went on to produce many products including lines and this remarkable DVD. Although published in 2005 the material in the DVD is still relevant today in fly casting.

What you get in the box. Rios Modern Spey Casting DVD comes with 3 DVD’s 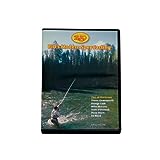 A brief history on the Spey cast origins in Scotland and then Jim Vincent gives us a quick message on how the DVD came about and his friendship with Simon Gawesworth. Plus a few tips on rod setup and getting to the river.

How to hold the rod correctly making sure it’s balanced in our hands so we can control the rod during the cast. Also how to stand correctly to put power and accuracy into the casting stroke.

Simon takes us to the classroom where he draws on the blackboard with chalk to show how D-loops are formed and what line stick is all about. We then go to the river to show these in practice.

The endpoint of the Spey cast where the line finishes on the forward cast is all-important. Simon has made this chapter to help make sure you understand how the rod should feel when the cast is finished and how the line should roll out over the water.

The anchor is where the line is before you start to make the forward cast. There are two versions the water anchor and airborne anchor. Simon explains the differences in the anchor and when to use them.

The founding element of the Spey cast is useful for bringing sinking lines up to the surface before re-casting or taking the slackline out of the line before re-casting. Simon shows it here to let you understand the forward stroke and aiming your cast.

The switch cast is also known as forward spey cast, jump roll cast, is more dynamic than a roll cast and is a Spey cast with no change in direction. A good cast to learn to build up your understanding of the mechanics of the cast before moving on to the Spey cast.

Simon shows how to perform the single Spey from start to finish, from the lift, the turn and forward cast. The section on common faults is good to help you get out of bad habits.

Simon breaks down the three stages of the double Spey cast showing where to place the anchor, the transition from the sweep, back cast and forward cast and how to hold your body. All these basic steps are shown in detail to help develop the cast properly. An advanced class at the end shows how to add extra distance into your double Spey cast.

Developed by Simon and his dad back in the eighties when teaching students at their fly fishing school, the snake cast was introduced to get the line back quickly to re-cast, watch as he breaks it down to the components and how to master the cast.

Dana Sturn from Speypages.com shows how to use the underhand cast originally developed in Sweden for use with shooting heads. Traditional Spey casting requires the top hand to do most of the work whereas the underhand cast uses the bottom hand so switching the power to the different arm. Useful for anyone with tennis elbow. Works best with shooting heads and Skagit lines.

Used for shooting heavy flies in tight situations, Scott O’Donnell and Mike McCune show how these lines came into existence and how to fish them. Extra casts shown are the back-handed double Spey and circle Spey with the Skagit line.

Ed Ward shows how this component stroke for Skagit lines the “Perry Poke” is cast. A good cast when backroom is minimal.

George Cook shows how to cast the “Snap T” and a variation called the “Snap Z”. Using your hands correctly make this cast a very powerful cast. Plus the wombat cast a hybrid of the perry poke and snap z combined. Simon then comes back to show some of the faults that happen in these casts and how to correct them.

A short chapter showing some of the casts being used and some fun as they are used to show catches of steelhead.

Simon shows us some variations of snake rolls and Spey casts these can help get you out of difficult situations and can be fun to do. Casts included are the Spiral Spey, Spiral Double Spey, Jelly roll and the Oozlum Spey. Take your Spey casting to the next level.

How to change directions for your casts, not always an easy thing to accomplish. Simon shows us easy ways to cast to a showing fish. A must for any angler!

Having obstructions behind you makes it difficult to form the D Loop and therefore difficult to cast, here Simon shows us how to continue fishing in tight places.

Simon shows us how to get extra distance into our casts. Once we have mastered the principles of the cast then its time to shoot line into the cast. Higher trajectory, more speed and line management will increase distance.

Using long belly lines requires adjustments to our casting stroke Simon shows how to do this for the line length and cast big lines on big rivers.

With difficult wind conditions it’s not always possible to fish with our dominant hand, Simon shows how to cast with our other hand to keep safe in windy conditions.

When not on the water it’s good to be able to practice Spey casting on grass, Simon shows a neat tip on how to make a leader designed to work on the grass.

Simon shows the setup required to fish overhead casts with a two-handed rod into the surf. Some great tips here as we learn how to cast 100ft into the feeding fish over the breakers.

Simon works down to a single-handed rod to show how to do some of the Spey casts to fish on smaller rivers, incorporating hauls to get extra distance. With the single-handed rod stringing different casts together to get out of difficult situations can be fun and the versatility is amazing. Dry fly fishing doesn’t normally prove itself to Spey cast but Simon shows that a Spey can help get a dry fly to a fish in a difficult situation.

At the end of the DVD is a series of out-takes that will amuse you as even the experts get the casting wrong and fluff their lines..:)

Ready to Learn to Spey cast like a Pro?

I have to say that this is the best Spey casting DVD I have watched. There are a few others out there that do a good job but 4 hours of tuition from some of the best Spey casters on the planet make for great quality and the top DVD for me.

You can learn loads of casts, what it should look like, what can go wrong and how to correct within each chapter. If you are going to buy one DVD for learning to spey cast I would highly recommend this one.

Its good entertainment even to put on in the winter months to watch how the masters do it to inspire you towards the next season. I usually give it an airing or two over the winter months to keep me interested and see if there is something else to add to my casting strokes. You will be surprised at how much extra you can get from each watching.

Do you struggle with spey casting? Can you not make decent casts to fish more than 15 yards out? I know how it feels when your buddies are making better casts than you and catching fish. Well don’t wait any longer learn how to spey cast like a pro with Rios Modern Spey Casting DVD you will not be disappointed.