I have always been a big fan of RIO fishing lines. Other fly anglers love how they are innovating and coming out with new products all the time, and how each one seems to be tailor-fitted to a fly-fisher’s needs. The pricing isn’t bad either (though it’s by no means cheap), and like other manufacturers, they have experienced fly-fishing staff on the payroll.

Now, this brings us to the RIO GRAND Fly Line Review. When you were first shown by your guide how to fly fish, the first thing he may have taught you is that a good solid fly fishing line on a substandard rod was preferable to a cheap fly fishing line on an expensive and well-built rod. So spend the money on the fly fishing line not the rod (unless you have deep pockets then go for broke on both) 🙂 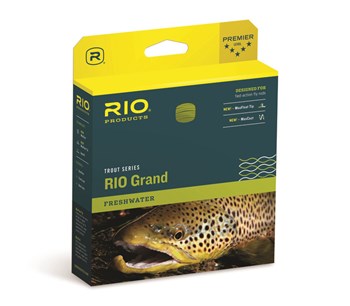 A lot of fly fishing anglers will look at a rod and see this is where to spend the bulk of their money and they would be wrong. I will always spend more on the line than the rod when I have a budget to work to. The Rio Grand Fly Line, much like the company that produces it, is fairly recent (especially when compared to its predecessors on the market).

Thus, it features welded loops and a patented head that all of the more classic fishing lines are missing. When it first came out, it was actually considered to be quite revolutionary because of all its new features compared to other lines on the market at the time. Years passed and the Rio company eventually came out with different colors and lengths on the original Grand Fly Line.

The Rio Grand Fly Line comes with loops either end!

While the newer lines certainly have some spanking new features that are worth noting, the classic Grand Fly Line still remains strong to this day. The initial feeling that most beginners or amateur anglers get after purchasing a Grand Fly Line might be buyer’s remorse. It’s a little unnerving to plunk down so much money on a fishing line, after all. There isn’t much room for doubts after such a purchase anyway, so there’s nothing left to do except reel the Grand Fly Line onto the spool of your fly reel.

All of your doubts will surely be laid to rest when you cast the line for the first time. If you were fishing from a small drift boat, short, rapid castings into the water would be the preferred option. You might then notice that the feel of the Rio Grand Fly Line under your fingers would be smooth as silk, and its weight would make short-range casting much easier. You might even like rediscovering your fast action rod’s full potential after you make the switch, and that in itself is worth the price.

Whats the point to the fly line standard?

The Rio Grand Fly Line is significantly heavier than the AFTMA standard, but that’s precisely what makes it ideal for executing and replicating both short-range and moderate-range casts (especially if you’re using a fast action rod in the first place). The weight forward distribution of the Rio Grand Fly Line also helps make it an ideal match for most fast action rods. The tapered finish, which suits most (if not all) fly sizes, is a nice touch, too.

Beginners will probably appreciate the DualTone colors on the Rio Grand Fly Line since they reveal where the ideal loading point is, and that can be a great help if you’re still trying to feel your way around somehow. The one gripe about the color is that if you get the yellow and camouflaged variant, it doesn’t really blend in with the natural background as it was probably meant to. Perhaps it’s a small irritation, but it can throws off some of the smarter fish from taking your fly and a longer leader may be required to stealth up the cast a bit. 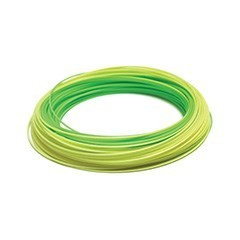 However, its other qualities more than make up for its aesthetic limitations. For example, while its weight allows for better casting over short to moderate distances, it does lay quietly onto the water, so you don’t end up scaring off jumpy fish like carp, as one RIO GRAND Fly Line Review pointed out. Just make sure you cast it in murkier waters, though. 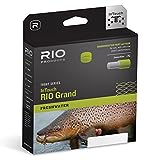 The weird camouflage paint scheme may look suspicious to the fish. A reel of the Rio Grand Fly Line also makes for great shooting, and has almost zero memory recoil. Those fishing in locales with tropical temperatures may not have much use for that, but the added flexibility is a godsend in cold temperatures where lesser fishing lines tend to go rigid after a season or so.

Be warned, though, that the Rio Grand Fly Line is not suitable for big distances and/or intemperate conditions such as those you might find in big, raging rivers. The line is much too thin for mending in such situations, so you’re better off switching to a heavier line. But the company never advertised the Grand Fly Line to be used in such cases anyway, so this shouldn’t be a big deal. 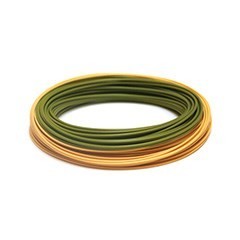 The MaxFloat technology in this tapered line is all it’s cracked up to be and more, however. Apparently, the end of the fly line is coated in a patented coating that’s meant to repel water so that the tapered line takes considerably less effort to pull back or mend. And you would be pleased to find that it does work exactly like that.

You won’t have to pull back so much when you rein in another heavy trout on your next fishing trip. The Rio Grand Fly Line is a bit of a splurge, but it’s still more affordable compared to the more upscale lines out there and it definitely delivers on its promises. Any avid fisher would really be sold on the wonderful feel, smooth motion, and the slickness of this product. Anything that makes you feel less tired after a day at the boats is very much welcome.

The Grand Fly Line is another solid home run for the Rio Company, and it makes you look forward to whatever they might come up with in the future.