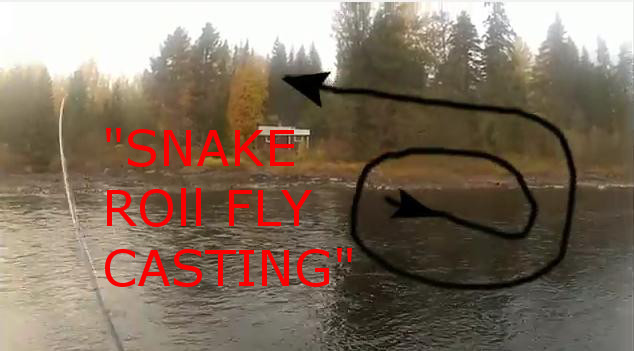 Ever stood on a platform fishing for trout and with your cast directly out in front of you a trout shows to your left or right?

As a beginner you only know the overhead cast so you can’t directly cast to it so you have to retrieve the fly line in by hand and start to false cast and turn out towards the risen trout which takes a few seconds or longer by which time the trout is most likely no where close to where it just showed.

So you now have time wasted changing direction and frustration has set in because of your lack of skill. This continues for a while until you give up chasing ghosts and either just concentrate on the water in front of you or pack up and go home. Now I know that later is a bit extreme but I have been there when trout have been jumping all around and not been able to get my flies into the target zone quickly enough.

Before we get into it let me say there are 2 variations to this cast. These are changing direction to your left and to your right…easy enough so far. Let us take the left direction first which for a right handed angler will be the easiest to learn.

With the fly line directly out in front of you as in a normal overhead cast retrieve with your line hand the correct amount of line so you have the normal cast amount of line on the water. We don’t want to get out of our depth by trying to lift the whole line as we can build up into our maximum distance amount but for starters just do what you are comfortable in the overhead cast or even a bit less to learn the cast.

There is no e in snake roll is there?

OK so for the left turn we start by drawing a large letter e in the air in front of us. As we are going to cast left we start by moving the rod level and to our right in a horizontal line as performing the start of the letter e then we start to curve the rod tip up and around as writing the letter e but accelerating the rod as we go then stopping as we pass the tail of the e as if we were going for another turn.

Got it? No? OK lets go a bit further!

What I mean is as you reach the point of the rod over your shoulder as in the overhead cast stop a brief second and the line from the tip will flow to your left (the direction of the cast) with the rest sitting in a nice D- loop to your right. You then only need to perform the forward cast to the left throwing the loop and trailing line to complete the cast. As the line is already set up in the direction it’s like performing a simple roll cast back out to where it came from (which is now out to your left).

So their are two main phases the first phase the actual snake roll which is used to change the direction of the line and second phase the forward cast.

Now for the right directional cast

So lets look at how to perform if for a fish showing to your right (again for a right handed angler) . Here we have 2 choices perform the cast over the left shoulder or use the left hand. Personally I find performing the cast over the left shoulder easy so that’s what I do. I can perform it with the left hand but it takes a bit more control and timing on my part so I prefer my right hand but its completely up to you which way you do it.

So here we go as a right handed angler performing over the left shoulder. First you have to do everything in reverse to the above left directional cast. So instead of drawing the letter e we will be doing a reverse letter e as it looks in a mirror.

So start by taking the rod tip and drawing a horizontal line to the left then up and over as drawing the reverse e accelerating as we go bringing it around and up towards our left shoulder. At this point stop and the trailing line will flow to your right ready for the forward cast. Then push forward with the upper arm making the forward cast to the right. You line should now flow out to the right where you want it.

These casts do take a bit of time to get the timing and direction right as well as the forward cast distance and angle of degree to be able to land the fly directly in the showing fishes path. With practice and persistence you can master it and then the next time you are fishing a lake and a fish shows to either your right or left you will be able to put your flies directly in front of its nose. Your take rate will go up along with your catch rate and you will be a much happier angler.

I know explaining this can be a bit difficult unless you have seen it performed so check out this video by Orvis Company a great resource for fly fishing showing how to perform the snake roll, enjoy!  Feel free to leave me a comment below if you need any extra advice.