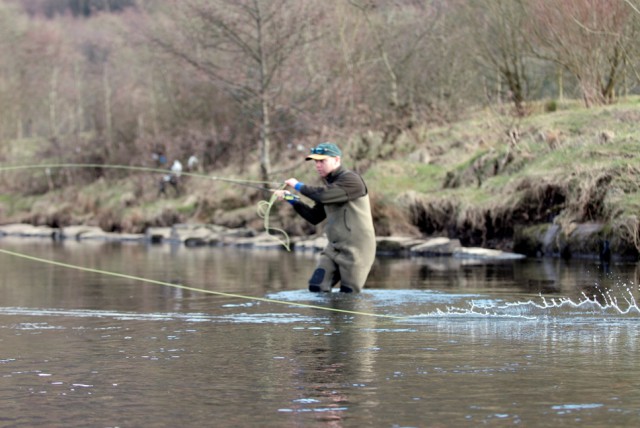 Have you gone to your favorite beat on a river to find the wind is howling downstream the direction you were intending to fish and realized you cannot fish that banking as you only know the overhead cast or single spey cast. Only knowing them means that would put you in danger from your flies. As I see it you have three choices go to the other banking, go home or learn how to double spey fly cast.

Double spey fly casting is great for allowing you to fish downstream when you are faced with a strong downstream wind. In the single spey cast, roll cast or overhead cast the wind is likely to blow the line and flies downstream towards you and can make the act of casting very dangerous. It is much safer for you to use the double spey cast to enable you to still be able to cast and not give up for fear of being hooked by your own flies. For this demonstration we will suggest we are fishing from the left banking on a river to a downstream flow going right to left. This all performed by a right handed angler.

There are four main phases to this cast the first the lift is performed the same as the single spey cast by lifting the fly rod slowly to about 10 o’clock. Don’t lift too high or you will cause the line to come in too close to you during the next phase the upstream sweep.

Next we move the rod in an arc by a gentle pull upstream keeping the rod the same height above the water to make the fly line move up to our right side. This arc is made by moving your rod 90 degrees from the downstream position to the upstream position in a sweeping curve.

Then when we have the rod upstream we sweep down stream again and around over our left shoulder forming the D-loop out to our left side in the opposite direction to where we want to send our forward cast. This sweep is done with more speed than the upward sweep ( phase 2 ) accelerating into the upward sweep to form the D-loop. As you do this you will see your fly line cutting the surface with a little spray as if it were the dorsal fin of a fish cutting the water at speed.

When we reach the top of the D-Loop we immediately perform the forward cast. This forward cast is performed like any other forward cast accelerating and stopping at the 10 o’clock position to put the rod energy into the fly line to cast a tight loop across the river. The cast should be performed in the opposite direction to the D-loop formed as this will create the best energy switch. If you try to move off the direction you will lose power and the cast will falter.

2) Accelerate as you progress

3) Commit to the cast once started

Here is a video on double spey casting with a single handed trout rod. Notice the spray as the line sweeps from the upstream position to the downstream position. Lee here puts in a haul at the end to further load the rod. At the beginning don’t try this just concentrate on forming the motion and forming the D-Loop to get the cast working. You can add a haul later when you get more experienced.