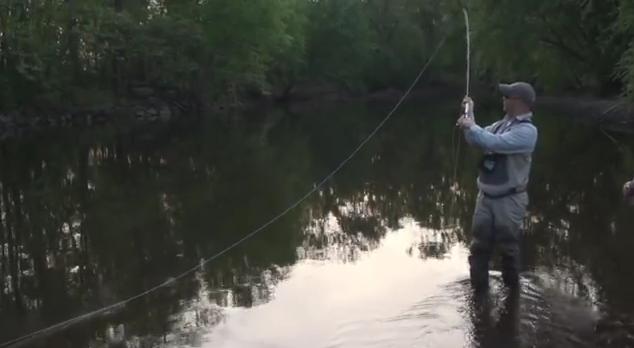 What is the switch fly cast?

The switch cast  is somewhere in between the roll cast and single spey cast. It is believed by some that this is a new cast but fly anglers have been performing it for hundreds of years. Its just become more prominent now as fishing suppliers have been targeting new markets by naming new switch rods.

The switch fly fishing cast is a more energetic roll cast made with one movement without the pivot of the upper body performed in the single spey so you cast in the same direction as you lift the line from. Sometimes its called the touch and go cast. You can find a bit more history on the cast here.

What rod do you need to perform switch casts?

Typically they are 10-13ft in length with line ratings from 6-8 respectively. Basically its reducing the double handed spey rods into another middle sized market which anglers have grasped with great zeal and enjoyment. I myself have a 12ft 6 Guideline LeCie rod which I absolutely love on the river for fishing for salmon or trout. Its light enough to fish single handed and I have the butt section to help perform double handed casts when required on larger sections of the river.

Its a misconception that you need a 14ft double handed salmon rod to truly switch cast. It can be done very well with single handed trout fly rods as well. Its great to get a fly out when you have no back room to do the basic overhead cast. Its also the starting point for any of the other spey casts. If you can perform the switch cast well there is no reason you cannot progress to more complicated power spey casts like the double spey, snap t or c casts.

How to perform it?

There are 3 phases to the cast, the lift, the sweep and the forward cast.

The first phase requires picking up the line from the water slowly so you can perform the sweep to your right side (for a right handed angler). This lift is to about 10 o’clock and done with a steady slow movement to the top.

Then at the top we sweep the rod to our right at a slight angle to form the D-loop behind us and accelerating at speed.

As the D-loop forms we immediately make the forward cast powering through the cast to the full stop and again at 10 o’clock this power and stop allows the energy to be sent into the fly line to roll out above the water in the opposite direction to the D-loop which was formed previously.

When to use the switch cast?

For maximum effectiveness the switch cast should be performed in the opposite direction to the D-loop formed. The direction of the cast is generally very close to where the fly line has been retrieved from originally. So in essence the switch cast puts the line back out on the water after a cast has been retrieved from the previous cast. If we want to change direction significantly then we need to use a different spey cast usually the single handed spey or a snake roll to make larger directional changes. The switch cast has more power than the basic roll cast as we go into the sweep with energy and so we can get further distances with this cast over the roll cast.

Check out the video by tight lines fly shop to see hoe to perform the switch cast along with points on the roll and single spey cast using a switch rod.