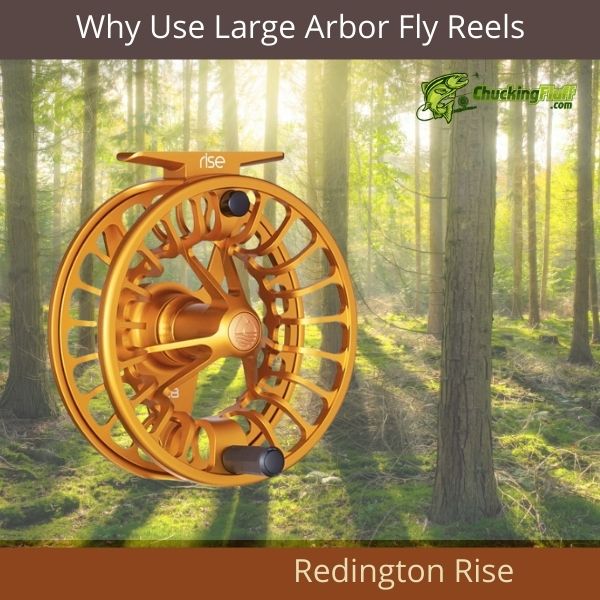 What is that one essential fly fishing gear you will never compromise?

Is it your fly, the reel, leader, rod, or line?

While all of these are crucial and part of fly angling in all ways, your fly reel is as essential as any other gear.

Besides holding your fishing line, it aids in casting and landing fish; a large arbor reel increases your retrieve rate, reduces line memory, dries the backing, and is easier on your line.

There are different reel types and sizes depending on where you are fishing and the target species.

The size of your arbor is among the factors to consider when choosing a good fly reel for your situation.

Until a decade ago, most fly fishing reels resembled the one patented by Charles F. Orvis in early May 1874.

They were narrow, ventilated and could hold the line and backing closer to the centres and spindles; thus, you had to rotate the reel countless times to retrieve your fishing line.

Large arbor reels have revolutionized and upgraded fly reels with a slight change.

These are currently the hottest things in fly angling since the popular bead-head nymphs.

Why Large Arbor Reels are in Charge

First, large arbor reels are wider, with oversized spools holding the line in a position far from the spindle and the centre.

For all anglers, from salmon to trout fishers, these reels offer certain vital advantages you will learn today.

I am among the early adopters of the large arbor fly reel revolution because I like to think I could cast flies from here to River Tweed.

I know it is among my bad habits, but I will be that guy.

I can’t since I have more fly line fed out.

If I’m angling in big rivers, it is common to spot me with long casts out ahead of me, with almost half of the line looped and aimlessly lolling in the currents just below me.

Here’s what happens: I’ll hook up on a water buddy, terrifically strip in slack and spend an eternity reeling in the excess line to catch my bolting buddy on my reel.

This was a massive problem before scoring a large arbor fly reel.

Imagine a desperate guy striving to keep his fish while crazily reeling in plenty of line on the spool that seemed smaller than a crotchet.

Combine this with a short walk down the river, and besides reeling in the line at an inch per minute, the tangles my line is in can be compared to King Tut in bandages.

Indeed, not a proper situation!

I caught thousands of trout on one of my old faithful narrow spool reels – a gear I relegated to storage in the furthest corner of my basement.

And despite missing this old buddy, catch me dead using a narrow spool reel again.

Safe to say, large arbor reels retrieve the line six times faster than their smaller counterparts solving the entire slew of issues for guys like me.

If you know me, you know that I am about to have a blast of fly angling while enjoying the thrill of the play and the catch.

Most anglers, I included, advocate for not playing the fish long as it can get exhausted beyond recovery.

If you have invested in a large arbor fly reel, that is a massive step towards being a responsible angler.

You can reel in more line faster, and since most modern reels have advanced drag systems, you’ll play the fish well.

You’ll do it faster and powerfully when you are ready to hand them the wood.

This is better for fish at the end of the line; if you want to net that buddy, admire, snap, and release it, then get back to business, large arbor reels are the real deal.

Easier on the Line

It doesn’t matter how supple and new your fishing lie is; fly angling remains subject to the issue of line memory.

The tighter you wrap it around a tiny spool, mainly because the reel might sit longer between fishing escapades, the higher the chances of maintaining the curls when you badly need it to cast well and lay flat on the water.

Large arbor reels have significantly larger spools to reduce such stress on the fly line.

Remember me complaining of line tangling somewhere at the beginning of this post?

The benefit of fewer tangles is associated with the reel being easy on your line.

Tight memory curled fly lines have higher chances of getting into horrifying gnarls.

Multiply this situation by a thousand if you suffer from the disease of too much line out like I used to.

Gnarl reduction is a complicated science, but I am for everything that keeps me casting and not detangling.

When I began using large arbor reels, the frequency of this aggravating occurrence drastically dropped, and I was surprised at how much I had to suffer from when using narrower spools.

Suddenly, the entire angling experience became more enjoyable than before.

And any day gear is made more remarkable; I am in!

Gone are the days when fly fishing gear and tackle manufacturers manufactured products to their liking.

Things have changed over time, and fly anglers are suckers for style and cool-looking things.

We could behave like we are all about functionality over form, but honestly, the look-neat aspect plays a tremendous role in most purchase decisions.

And if you can spot any of these things in fly angling that outshines a perfectly made modern large arbor reel, let me hear your argument.

If anything looks more fancy than a clean and sleek large arbor reel, I’ll rush to buy it if I don’t own it yet.

Don’t misunderstand me; I appreciate and revere the historic appeal, look, and style of classic small arbor reels, but their counterparts’ designs are sexy!

I know some of you have been troubled by knuckle whacks when using small arbor reels.

The whacks occur when battling trout think you are a dumbass who can’t play them at the PhD level and decided to bolt.

You will be startled by its guts, mesmerized that you landed a buddy but lost the grip on your reel handle.

It spins freely at a terrific speed as you try to assemble your senses and regain grip.

You will hate it if this happens to you because it terribly hurts.

Large arbor reels might not save you from this, but they reduce the instances and minimize the pain.

Wouldn’t you appreciate this? 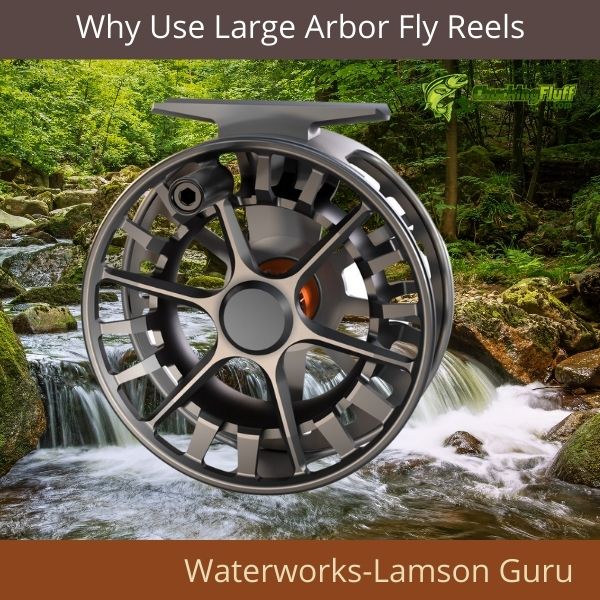 Most inner and sides of large arbor reels have porting.

These are slots or holes instead of the solid surface on older reel designs.

The porting reduces weight and helps to quickly dry soaked backing by exposing more of it to wind and sun.

A Difference in Drag Tension

As a fish pulls the line off the reel, drag pressure naturally increases.

Imagine a standard or small arbor reel full of line.

The drag pressure feels consistent as you strip the line off a reel because there is more line circumference on the reel to help your spool spin well when tugged.

Stripping more line off the reel narrows the line circumference and further reduces are you near the spool’s core, thus drastically increasing drag pressure.

Large arbor reels face this too, but the effects are minimal because of the bigger diameter and arbor.

Try false albacore fishing with a standard arbor reel and hook into whooper of 16+ pounds or thereabout.

Let me know if it doesn’t take you farther into your backing and spool you.

Bass and trout angler hardly need a lot of backing, but more has never been a bad idea.

If you are fishing any of these species and need extra backing, you will have it.

Saltwater anglers or lovers of steelhead and salmon understand the vitality of more backing.

A reel that can take more is a godsend and boosts your confidence when playing and landing bolting species.

Wide and big spools can hold thicker fly fishing lines. All Spey lines, some sinking fly lines and streamer-specific ones are thick.

You will need oversized spools on large arbor reels to fit them well.

Conclusion on Why Use a Large Arbor Fly Reel

If you have never fished using a large arbor fly reel, you must be wondering why you spend more time pulling the line on and off the reel.

Changing reels is the ultimate solution.

Besides instantly fixing the problem, it upgrades your fishing experience.

To find a few that work for you, borrow from fellow anglers or visit tackle stores to try and sample out a few.

Test their drags, talk to the owners or sellers about the inner parts, remove and assess the spool.

Feel the reel’s weight and, if possible, bring a long fly rod to complete the combo.

Feel and test the balance to get what matches and is comfortable to cast with on your next adventure. 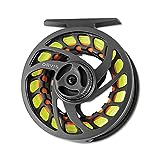