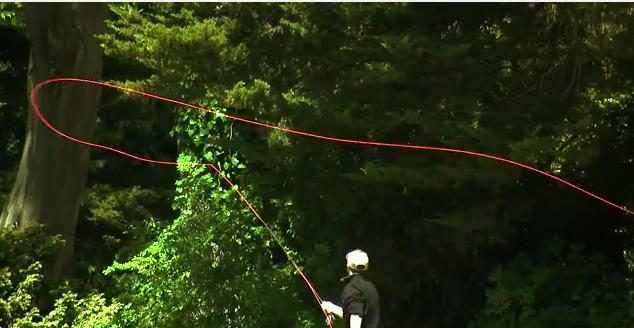 Do you struggle to get your flies out to trout that are showing just out of reach say about the 20-30 yard distance? If so you are not alone. I too was only able to make short casts that reached about twice the length of the rod away and struggled to get to those lying fish that always seemed to know where they were safe away from my reach. Well its not impossible to get your cast to reach 30 yards you just need to learn distance fly casting techniques.

There are four main things that will increase a fly casters distance.

2) More speed in the fly line

If we take these in order high line trajectory means stopping your rod as high as possible so the fly line has the time to fly forward before it loses speed and hits the water. To do this stop the rod sooner on the forward stroke resulting in a high line. When doing this the back cast needs to be slightly lower to allow the straight line 180 deg from back cast to forward cast. The straighter the better.

Extending the stroke means moving your rod hand further through the cast which is done by drifting the arm after the stops in both the backward cast and the forward cast. As the rod is stopped just reach further back called drift and again on the forward cast we reach forward after the stop. We can add extra distance by rocking our body on both back and forward during each stroke.  This can add a few extra feet to the casting stroke and when done with timing and power will add extra speed to the stroke.

Tighter loops mean the fly line profile is minimized to push through the air better making it aerodynamic. To do this effectively you need to move the rod in a straight line as if painting the ceiling. The less of an arc you form with the rod the tighter the loop will be, the bigger the arc the wider the loop will be. Make sure to power stop the rod in both the forward and back cast to transfer the energy. Do these two things and you should have tighter loops.

So there you have it four distance fly casting techniques that will extend your fly casting in no time. Just remember Rome wasn’t built in a day you need to put in a bit of time and practice these concepts. Concentrate on one at a time practicing over and over, then when you have it do one of the other concepts until you can do all four on their own. Then its time to combine them to really see the line fly. In no time you will be able to cast 100ft like a pro. For more info watch this great video below by Leyland Fly Co