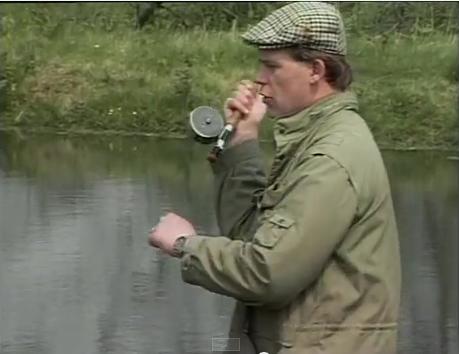 In our last post we discovered how to perform the single haul which can be either in the back cast or forward cast to improve casting distance or help in difficult windy conditions. Now we are going to take it one step further and put the two hauls into one cast to create double haul fly casting.

The timing on this cast is a bit tricky but with a bit of practice you can master it and be able to shoot long casts out into wide pools targeting fish that your fishing buddies can’t reach. The basic principle has four stages where your hands are together, apart, together and apart again widely used in the UK where in the US its down up down shoot. You will see this in a minute.

As with any cast you start with the fly rod low in front of you then as you pick the line off the water and back behind you as in the single overhead cast raise your line hand up to be close with the rod hand. Then like in the single haul give a swift pull out with the line hand as the rod is almost near the top of the back cast and travelling the fastest. This gives the fly line extra speed as the rod is already starting to load and flex.

As the line speeds behind you move your line hand back up to join your rod hand which is still above you waiting for the line to fully flow behind. Then at the top of the cast as you cast forward with your rod hand give another swift pull down with the line hand as the rod is coming to the stop position as again it is flexing and loading. As the rod is stopped in the forwarded motion let the line feed out from your line hand as it shoots through the rod guides into the forward cast.

When performed correctly you will have generated line speed in both the back and forward section of the overhead cast and this will gain you many extra yards into the cast. As with the single hauls don’t try to over do it with lots of power as you will only cause trailing loops from over loading the fly rod and this is not good. Its much better to start with small tugs on the line and build up to what you and your rod can cope with.

Some tips to remember when performing the double haul fly cast.

Want to be a better Caster?

Watch Michael Evans as he performs the double haul fly cast and also shows some of the things not to do!

Some great tips from Lefty to keep things simple.