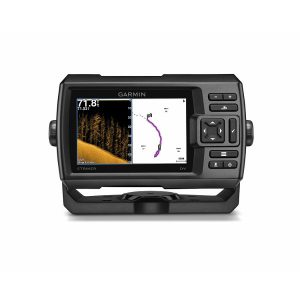 Garmin Striker 5DV Best Budget Buy with the Best Imaging The Garmin Striker 5DV is an affordable fish-finding model with better sonar imaging than its counterparts. It also provides a split view of the traditional and the down view. Garmin has an enviable series of Striker fishfinders. They are meant for everyone and suited to every budget.

They try to pack the best features in a model while also trying to keep it affordable. Compared to its counterparts, the Garmin Striker 5DV wins, easily. Even though it does not have a mapping feature, the lack is made up for by its low cost. The cost, compared to other products is considerably less. There is the option to purchase a separate mapping device. 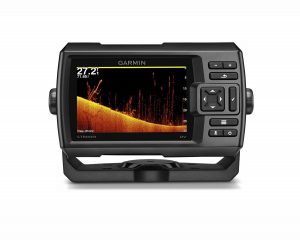 • Simultaneous waypoint and traditional view
• CHIRP sonar—better detail and better separation
• You can upgrade your transducer
• Can plot up to 5,000 waypoints
• Customizable sonar setup
• Waypoints can be named
• Dual frequency screens and split zoom
• Speed displayed on the screen
• Transfer waypoints from other Garmin Striker 5DV GPS fish finder combo

• Garmin Striker 5DV is a great device for beginners—The Garmin Striker 5DV fish finder is best suited for beginners. It has the best sonar imaging capability at a very affordable cost. The fish symbol can be customised to look like actual fish. It is great for people starting out, who would not immediately get used to the dots that are displayed on the DownVu mode, to represent fish. It is also great for stationary fishing, as it displays the population and movement of fish within the sonar range

• USP-Garmin Striker 5DV GPS with high-resolution images—Perhaps the best feature of Garmin Striker 5DV is the split screen of the traditional and DownVu mode. You get the best images for the nature of structures in the water and the location of the fish

• Works without lagging even when switching viewing modes—The compact device is built to last in harsh weather. The rugged Garmin Striker 5DV cover is also waterproof, so you can go out fishing even when it is raining

• Powers up quickly • Get manuals, questions, and tutorials—Garmin support hours are from 8 a.m. to 6 p.m. local time. You can contact them through email or phone. You can also read the Garmin Striker 5DV manual, watch tutorials and register your product

The one big disadvantage of the Garmin Striker 5DV is the lack of mapping. However, the waypoint feature solves the problem to some extent; you can still mark spots to return to them later. If you are looking for a compact and durable fish finder with good imaging, but do not need mapping, then this is the product for you.

When you switch on your device, you will see the following options for views on your screen:

• On the Garmin Striker 5DV fishfinder basic screen, you will notice the water depth, temperature, battery voltage and time

• The traditional view is at a frequency of 50/77/200 kHz. The default background is blue, but you can go to the settings to change the colors. This is a great option. You can test out different color schemes to see which color you are comfortable with

• The DownVu screen is displayed for a frequency of 260/455/800 kHz. It is best to view what type of ground you are looking at. It tells you what is underneath. If you want to understand the nature of the bed, then this screen displays high-resolution images

• The traditional screen is better suited to check the population and status of the fish;it clearly displays the presence of fish. You can choose your own symbols for the fishes—one of the symbols that many people find useful is the one that also tells you the depth at which the fish is at.

All the above images are high quality and accurate images. This is achieved with the help of the CHIRP technology, which remains the best to date. However, the CHIRP sonar would not function so well without the GT20-TM (4-pin) transducer that comes with the Garmin Striker 5DV fishfinder.

The waypoint map is not an actual map, however, it does show you locations, and you can mark your points. You can choose to mark a point where you found the most fish and return to that point again the next day. You could also mark the jetty from where you set off, to easily return, without getting lost. You can name your points, assign a symbol and even add comments. They can even be sorted by their names and distance.

With the split screen function, you can view the traditional as well as the DownVu on one screen. This helps you get the best idea of what is beneath you. You get the best resolution of the formations below you and the population and location of fish.

The high-resolution images can be generated to a depth of 2,300’ in freshwater and 1,100’ in saltwater.

The circular flasher tells you the depth of the fish and tells you the location when they are within the range of the sonar. This helps in knowing whether your tactic is useful or not. You can tell whether the fish is moving towards you or not. This is great for stationary fishing such as ice fishing.

Many people would argue that it does not have a mapping feature and a SideVu to make plotting more effective. However, when you consider the low cost, you could forgive the makers! If you want a SideVu, you could pay an additional $200 to purchase a higher end model.

You could also buy an additional mapping device, or if you already have one, then the Garmin Striker 5DV chirp GPS fishfinder would be a great device for you. e and most important of all it’s totally ergonomic. When sensibly used there’s total flexibility and comfort – two absolute essentials for any fly fishing angler!

Highly recommended for anglers of any shape, size, age or experience. 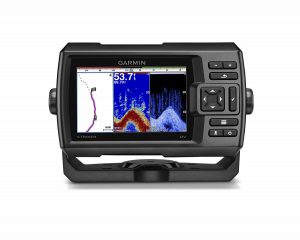