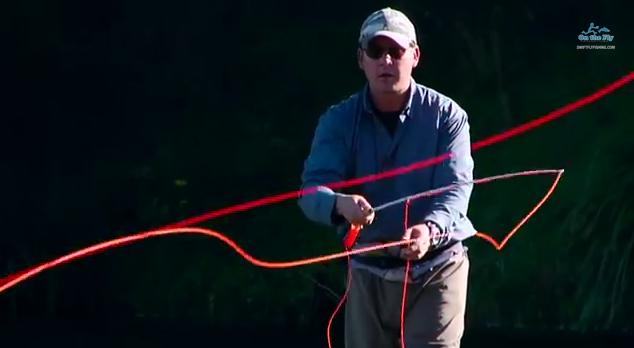 Have you been to a river with a fast pool knowing it holds fish but unable to catch them as your fly line flows through the pool far too quickly? Or have you been to a river when the pool you are fishing is way too slow and you find it difficult to put any life into your drift with your flies? If the answer to any of these questions is yes then you need to learn how to mend your fly line to control speed.

There are 2 directions to mend a fly line during a cast upstream or downstream. Of these two direction you can either mend in the water or in the air. Most use the water mend as its easier but if fishing for easily spooked fish then the air mend means your line causes the least amount of disturbance and so increases your chances of hooking and landing fish.

Upstream to slow down the drift!

First lets consider the two directions of mend the upstream and downstream and take them individually. The most commonly used fly line mend is the upstream mend this is used to slow down the fly line by moving the belly of line in the middle of the river up a few feet by flicking the rod tip in an upstream direction.

Generally the river flows the fastest in the middle so as a straight cast of fly line lands it speeds up most in the middle with the river current. This causes the line to bow and moves the fly in an unnatural way in the current to fish and trout waiting in the verges.

To make the movement of the fly appear more natural we put in an upstream mend to slow the drift down and have the whole line move at the same speed so the fly moves the same speed as the river flow and then appears much more natural to the waiting fish.

Downstream to speed up the drift!

The downstream mend is used to speed up a cast when the river is flowing very slowly and you want to put in a bit of movement into your fly. In fact in Scandinavian salmon fishing the normal cast is to cast almost straight across the pool downstream mend and strip the line back fast to really speed up your fly.

This causes salmon to really attack the fly as they don’t have much time to think about it before hand but have no option to rush and take the fly. I have had much success with this method while salmon fishing.

So we have looked at slowing down and speeding up our fly during a drift but what about a river that has fast water on one side and slow on the other? This is when we may need to mend part of the cast upstream and the rest downstream. This is when we need to perform the air mend for the section closest to the fly then when the fly line lands on the water we mend for the section closest to the rod.

Its a more experienced angler that can pull this off correctly but with practice you too can be doing your mends to control the fly line drift speed.  At the end of the day I like to mix it up a bit if the first couple of drifts have not induced a take by trying different mends and retrieves to initiate movement into the fly and hopefully induce takes from lazy fish.

Mends are also important to maneuver obstacles in the river, say for instance there is a large boulder in the middle of the river but you know there is a fish in the section furthest away from you. You don’t want your fly line getting caught on the boulder so you have to induce mends upstream to push your fly line away from the boulder to allow the fly to pass down far enough to induce a take from the lying fish.

There are loads of ways a mend can help get you out of trouble on the river so I would get busy practicing how to perform mends both in the water and in the air.  For more information on fly line mending check out these videos by Trails and Bumcast