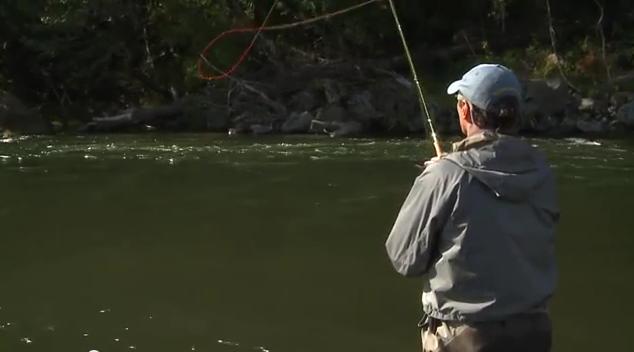 Have you ever tried fishing with a shooting head fly line? It is different from normal weight forward fly casting in that there is extra weight set to the front on the line making it so the fly rod is already loaded and flexed without even having to put power into it.

This extra weight makes it easy for anglers to get extra distance in their casts but it not much good for delicate presentation as the weighted line normal drops with quite a splash. Even when fully controlled and cast correctly there is a lot of water disturbance when the cast lands so this type of fishing is not very good for fishing dries for brook trout.

However, if fishing for Salmon in fast water or pike in large lakes with large flies it has great advantages over normal weight forward lines as you can get good distances and with the different line densities you can get a fly down to the fish quickly in fast water. It is a good line to have in the fly fishing arsenal.  In fact, I keep a wallet of several heads of different line densities so I can quickly change from one to the other when required.

Shooting head fly lines are generally about 11-13m long for salmon fishing or 9-10m for trout fishing etc. As such you need to have most of the head outside the tip guide on the rod to load it correctly. The head will be attached to a running line that has a straight profile and allows the head to be shot out over the water hence the name shooting heads.

Some lines come with pre-made loops which make interchanging very easy.  You need to attach your shooting head to a running line of appropriate strength with the loop to loop connection. Lines of 8 weight and larger usually need a 35lb or equivalent running line while smaller lines can be used with 20-25lb running lines.

The larger thicker running lines are easier to use I find as controlling the thinner line between casts can be troublesome if you are inexperienced. The slightly thicker 35lb line does not kink and tangle as easily as the thinner running lines. This happens because you need to retrieve a lot of line in between each cast which needs to be looped between your fingers and then released again during the forward cast.

As the cast is powered out sometimes the loops of line become tangled and can turn your fishing experience into a seated affair working out a bird’s nest of running line if you are not careful.

So how do we load a shooting head line?

To be able to load a shooting head and depending on which cast you are attempting see casts you need to retrieve back a lot of running line in between casts so the head is just outside or inside the tip guide of the rod. The difference here is down to the rod size, the head length and the experience of the angler. However if trying this for new I would advise keeping some of the head in the tip guide.

When starting out try to cast small distances getting a feel for how the head loads the rod and when to release the running line which you will have trapped in your free hand.  As a start I would recommend the switch cast or overhead cast to work with before progressing to more advanced lines.

The cast performed is the same cast as you would for any other fly line you just need to remember to stop the rod high on the forward cast to allow the head to shoot for distance. If you stop too low the loop will not be as tight and the head will crash short on the cast.

If you are trying to find the sweet spot or loading point on a new head I recommend testing it out on grass without shooting line to see if the line loop flows out properly as you lengthen the head out of the tip ring. You will find a point where you can feel the head wanting to pull the running line from the reel.

You can then see at what point the head is at in relation to the tip ring so you can use this to gauge each cast as it will be roughly in the same position to load the rod correctly.  You can use a waterproof marker to mark the running line at your hands to mark a spot of load if you are more comfortable looking at that point than the rod tip.

With shooting heads it is recommended to make a larger than normal leader to help anchor the cast on the water between each cast. If using a 14ft rod a leader of 14-20 ft should work. Again on a 10ft trout rod about 15ft is required. If this leader is tapered it will also help with the turnover of the flies.

When using the spey type casts like the switch cast you need the anchor to hold and not skip when you power forward with the stroke. A long leader will help do this and give better turnover. It also has the advantage of placing the flies a bit further away from the shooting head which is quite large in diameter and easily visible to the fish.

I have had loads of fun casting with shooting heads and love the way the line shoots through the rod rings to make big casts. See the video by Rio Products below for more info on shooting head fly lines.