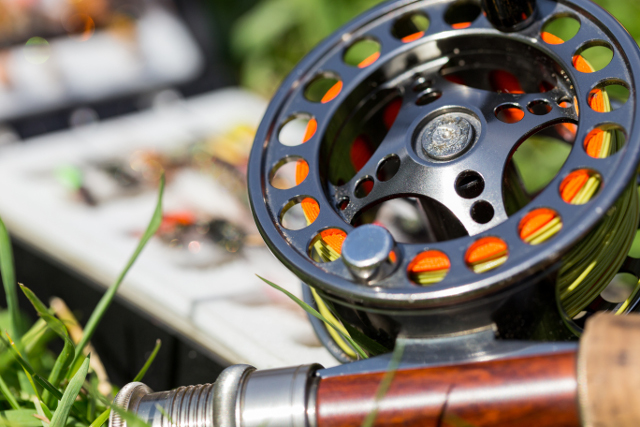 Fly fishing reels explained will show you that the reel is more than a container for your fly line to keep it off the ground when playing a fish. Unlike conventional bait rods the line will have to be retrieved in by hand to entice the trout to take your fly and as this happens the line will be increasingly lying at your feet unless you are using a fly line tray

This is not so bad when you are on a sandy beach or clay bank side but if there is a lot of undergrowth then the line will get caught up on the vegetation and when that trout of a lifetime decides to take your fly you don’t want to be trying to pull the line free to play it in. Many a prize trout was lost this way believe me.

The reel is therefore to reel up the line before you try to play the trout. This can be done 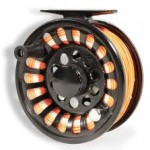 with ease with a bit of practice as you hold the line tight to keep tension on the trout as you reel up the line with your other hand. This may sound difficult but it is not.

You can play a trout without reeling in first but this is only advisable when on a snag-free environment, even sitting in a boat is not the place as oars, bags, your partner can all get tangled up with your fly line very easily.

Once you have the line on the reel you can let the trout fight and take line and reel it back on with the knowledge that you are free to move in any direction it decides to go.

So what type of fly fishing reel are you after?

To begin with, you will have decided on which fly rod you need and on the handle of that rod, you will have a line rating usually in the range of 5, 6 or 7 for trout rods.  This is when it is important to match the fly line and the fly fishing reel to the rod so that everything is matched and balanced. When it is balanced it makes the task of fly casting so much easier and the rod will load and form nice tight loops.

Manufacturers of fly fishing reels have come up with a system of covering a few sizes so your reel can be used over various rod sizes. For instance, there are 4-5, 5-6, 6-7, or 7-8 and sometimes 6-8, 5-7 covering three sizes of line.

These are only recommendations by the manufacturers as the overall size of the reel will depend on;

1 The size of the fly line
2 How much backing line you wish to put on.
For example, the Redington Rise 7-8 fly reel is designed for a weight forward 8 line plus 200yds of size 20lb backing.

Lightweight fly reels are the way to go.

Don’t worry too much about this for now just look at the line rating on your rod let’s say it’s a 7 then we want to get a 6-7 or a 7-8 . These will be fairly similar in size one just slightly bigger than the other and hence slightly heavier.

The difference may be hard to notice in the hand but when fishing for an eight hour day we want our line, fly fishing rod and reel to be as light as we possibly can. Having lightweight tackle allows you to fly fish for so much longer without fatigue.

Like all things in this world when they make it better they put the price up and usually anything that is very light will have a large price tag so bear this in mind when deciding.

As you are a beginner I would try to get a setup as cheaply as possible as you can always get upgraded as your skills improve. Consider this if you go out and pay £500 on a new set up try for a few weeks then decide fly fishing is not for you it will be an expensive trial.

You could sell it off second hand but you will be lucky to get half of what it’s worth.  Also as a beginner, your skills will not be as sharp as required and you will most likely bang it against something or have some sort of accident leaving you with a four piece rod when it came to you as three. 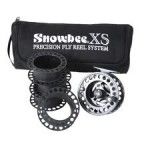 The other thing to mention is some fly fishing reels come with spare spools while others don’t. As a beginner you will want a full floating fly line which we will cover in the next post but as you progress you will want various density lines to cover different situations and fly fishing types. It is, therefore, cost-effective to purchase a reel with spare spools.  There are in some cases cassette fly fishing reels cartridge reels that allow for the inner section to be removed before placing in another in some cases these cartridge setups may have 4 or 5 spools.

Other aspects of the fly reel to consider

We have mentioned the size which is overall the main priority but there are other features that can improve your experience on the water.

What is the reel arbor?

The arbor of a fly reel is the depth of the center spindle from the edge. A classic fly reel of past generations would have a small arbor meaning the fly line would be wound tightly around the spindle causing line coil memory when trying to get the line out on the water after a period of time lying on the reel.

Nowadays reels have normally a larger arbor meaning the depth of the spool is shallower giving the line less memory coil and the ability of the angler to wind the line quicker as each turn of the reel brings in more line. There is also med arbor reels allowing the best of both, the ability to wind quickly but also hold a lot of line.

Some manufacturers now arbor their reels with certain grooves to help in line lay down and grip especially when playing larger species and I’m sure as technology improves more variations on the arbor will be available.

What kind of reel drag do you need?

There are two main options in drag type although many variations on how that drag is applied.  The two types are sealed drag and unsealed.

Sealed is the more expensive of the two options as these were developed to keep dirt and grim out of the drag system to make sure of constant grip and pressure throughout the lifetime of the reel. More and more anglers are taking fly fishing gear to the sea and as you may be aware saltwater plays havvoc with gear and the drag sytem on a fly reel is a prime example of a place for corrosion to penetrate. Having a sealed drag means saltwaer cannot get into the system and corrode it. Saying that it is important that anglers make sure to rinse off their reels and gear with freshwater afterwards to keep it in tip top shape.

The lesser of the two drag systmes is simple non sealed which means tis open to dirt and grim getting into the mechanism.  It is important with these reels to perform maintainance at peak times and during the off season to make sure there is not a build up of grit and plenty of grease keeping the system as good as possible.

On drag systems their are many ways for the drag to actually work. Many use discs of varing sizes and abrasion which rub together to cause pressure or drag on the fish as it runs. If non sealed dirt inbetween these disc can cause them to slip and stutter casuing the fish to be jerked and possibly lost. Other drag system use conical disc to apply the brakes. Two similary shaped cones fit into each other to provide a small drag system that can be sealed making it grit free and pretty much maintainance free. As you can imagine these sealed drag systems come at an extra cost but well worth the investment if intending to fish in the saltwater.

Anti-corrosion what to look out for in fly reels.

Fly reels need to be lighweight and to produce this most manufacturers opt for aluminum which is very tough and strong. To further give it long life they anodize the surface of the reel with electricity and chemicals which can produce not only tough surfaces but colors to further enhnace the beauty of the reel. Some companies have taking this process to a new level provide the angler with reels that not only have oustanding performance but are works or art. 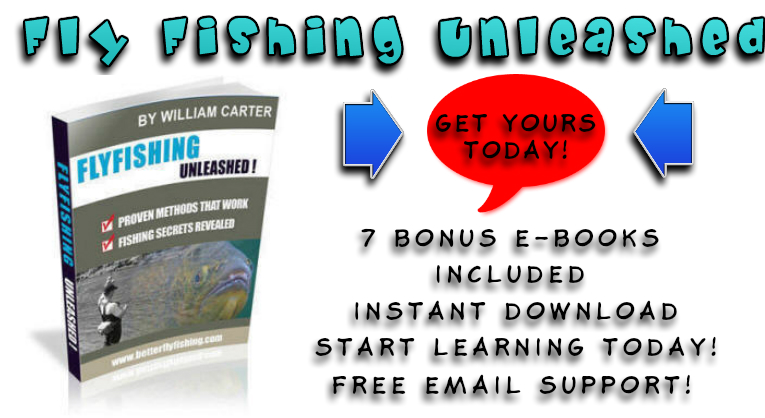 For more information check out this other post on trout fly fishing reels.