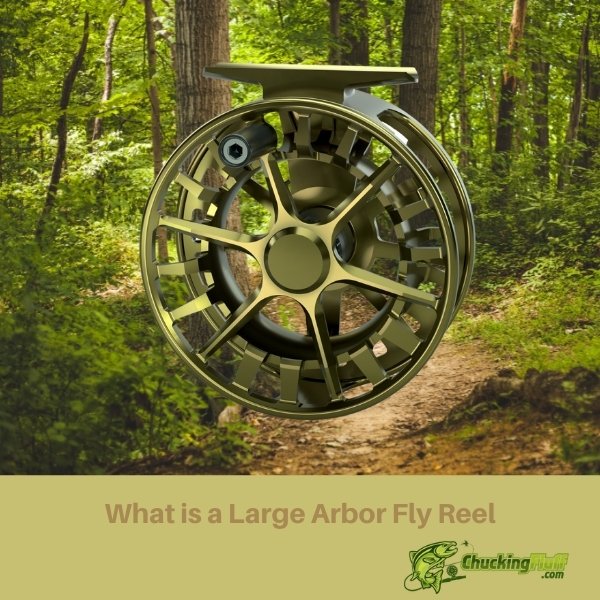 If you have been planning to clean up your now-ancient fly angling tackle and return to the game, you are probably going to eBay the old combo and spice up your collection with a modern fly setup.

It certainly commences with a fine fly rod upgrade (two or more if possible); however, close behind is dialling up a high-grade state-of-the-art fly reel.

I know of purist fly fishers who swear by their classic narrow-spooled reels.

It would be wise to compare, and in doing so, you want to ask yourself what a large arbor fly reel is.

I hear some anglers call them beasts – and true to the word, you would not regret it.

A traditional reel’s spool measures about ½ ” in diameter, while a large arbor spool is about 2 ¾ ” inch or more.

The most significant advantage of large arbor reels and the most typical reason most anglers love and prefer them is faster line retrieves.

This had to be top on the list because why not?

I am among the earliest adopters of these large arbor fly reel revolutions.

I know it is awful and a habit I shouldn’t have lived with for long, but I am among the guys that liked to think I could cast my flies from my home to the Inver.

So, it is true that I often had plenty of line fed out.

When I was casting in big rivers, it wasn’t unusual to spot me with longer cast out ahead of me.

Almost half as much fishing line was looped and uselessly rolled in the currents below me.

As a result, when I hooked up on fish, I hurriedly stripped in slack and spent what seemed like five hours trying to reel in all the excess line before I could get my fighting and fleeing catch on the reel.

Yes, I know I wanted to do everything right, and it was a bad habit, but I dropped it because why suffer?

Before I turned to a new leaf and scored the ‘beast’, it was an even bigger problem.

Picture me desperately trying to hold on to the fish and not lose it as I madly reeled in miles of fishing line on the reel spool that was seemingly not bigger than a matchstick.

To that, add a long down-river walk, and I wasn’t only reeling in the line at a rate of an inch per minute but also getting tangled up in the same line like the famous King Tut in bandages.

On some of my old small and medium arbor reels –most that I have handed over to buddies who love them – I still hooked hundreds of bass and thousands of brook, brown and rainbow trout.

I might still revere and dearly miss those masterpieces, but certainly never going back to using narrow spooled fly reels again.

I now hope you understand why.

Large arbor reels retrieve lines five times faster and better than small arbor reels, thus solving an entire slew of issues for an angler like me.

The moment I saw the first advert for a large arbor fly reel, it now struck me that I was ultimately over it.

Here at Chucking Fluff, we are about having mad fun fly angling, which means thoroughly enjoying the thrill of the play and the catch.

While at it, we consistently insist on ensuring you know the importance of not playing a fish for too long, exhausting it beyond recovery.

I wouldn’t want to compare fish to humans, but they have a life too.

If you have bagged yourself a few pieces of these beasts and didn’t know about this concept, you have unknowingly made the right huge step towards being a responsible angler.

Since large arbor fly reels can reel in lines at a terrific speed – not forgetting that modern versions have more advanced and highly efficient drag systems – you will easily play a fish like a pro.

But, when it is the right time to give them the wood, you will do it with quickness and power.

Ultimately, this is excellent for the catch on the other end of the line.

Assuming you need to net it, admire, snap and release the buddy, then swiftly dive into the same business again, large arbor reels are the answer!

Others will say no line memory, but there is certainly some though almost negligible – I love being honest here!

You can have the newest and most supple fly line, but fly angling lines are still prone to memory.

Hence, the tighter it is wrapped around smaller spools the more chance of curl.

Especially since the reels might sit for more extended periods between angling outings, the higher its chances of maintaining its curls when you badly need it to make clean casts and lay extremely flat on the surface of the water.

Since large arbor fly reels have significantly bigger centre spool diameters, they minimize such stress on the fly line.

In relation to reducing line memory, tight memory curled lines have higher chances of getting themselves into horrifying gnarls.

Increase this a million times, especially if you suffer from the same disease of too-much-line-out that I healed from years back.

When we go down to the complex science of reducing gnarls, I will go for everything that allows me to fish and not detangle for the better part of the day.

When I started fishing large arbor fly reels, the frequency of the previously aggravating occurrence drastically dropped to levels I had never seen before.

Suddenly, the entire casting experience changed to a strange enjoyment than it was, and any day something good is made better, count me in.

Gone are the days when we could fish with and in anything.

Tell me you are not that kind.

We often act like we are about function, efficiency and performance over form, but in all honesty, the look-neat-and classy aspect is a primary influence on our purchase decisions.

If there is anything in the fly-angling realm that does this better than today’s large arbor reels, I will listen to your argument.

I doubt anything looks cooler and finer than a sleek, high-quality large arbor reel.

Don’t get it wrong, I admire and appreciate the classy style, look and historic appeal of narrow-spooled reels, but larger options are plain sexy!

I doubt it is a stretch because those who have suffered from knuckle whack while angling know how it feels.

Knuckle whack occurs when a hard-fighting species thinks you are a wuss and can’t play at the master’s level and decides to make you the fool.

You will be baffled by its audacity; you will be temporarily awe-struck by the joy of the fish-on situation and let your hand off the reel’s handle, which will freely spin in lightning speed before you try regaining your senses and the grip on it.

Knuckle whack happens at this point, and if you have been fly angling for long, it has definitely happened to you, and you hated it.

Because it is a stab in the spine.

Large arbor reels might not ultimately save you from this issue, but it incredibly reduces the whack rapidity and pain.

Wouldn’t you appreciate it?

Most large arbor fly reels have porting along their sides and inner part.

These are slots and holes instead of a whole solid surface.

Besides overall weight reduction, it allows soaked backing to dry faster by exposing it more to the wind and sun.

As a fish pulls the line off the reel, there is a natural increase in drag pressure.

Stripping the line off your reel makes the drag pressure feel more consistent initially because of the large line circumference on the reel that aids the spool to spin easily if tugged upon.

It is also an issue with large arbor reels, but because of the reel and arbor diameter, the effects are less.

What are you waiting for if you haven’t crossed over to the large arbor fly reel gang?

If faster fly line retrieves, spending the better part fishing than detangling and being a rather conscientious fly angler isn’t convincing enough, nothing else will.

Meanwhile, if you love the beasts, let me know what masterpieces you are using and how they hold up.