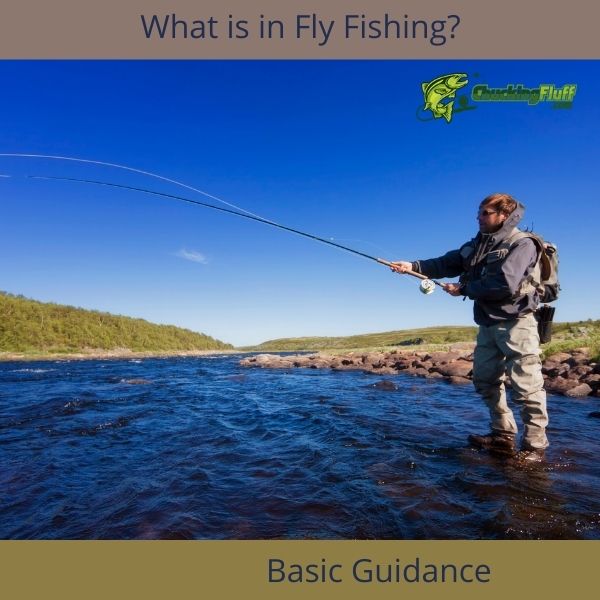 Fly fishing is a type of fishing where an angler uses an artificial lure to catch fish.

These lures are often lightweight, and the style is referred to as fly fishing because the lures imitate real insects or flies.

If you present the fly correctly, fish like trout will be fooled by the lure, thinking it is real and eating it.

What differentiates the setup from regular fishing is the fly line.

In fly angling, the lines are weighted, serving as the weights that cast your baits.

If I were to tackle this, I would spend days and nights and not finish since there are thousands of flies that fly anglers use.

However, they are divided into three primary categories – streamers, dry flies and nymphs.

A dry fly represents an insect on the water surface, while a nymph imitates an insect underwater.

On the other hand, a streamer emulates a small baitfish or any other organism.

Each category has its fly examples, and the lists are inexhaustible (I will create separate posts on this).

You can fly fish in fresh and saltwater, but your tackle will be different unless you are using an all-round outfit.

Fly fishing in freshwater can be done in creeks, streams, rivers and Stillwater like lakes, ponds and dams. Saline angling is primarily done in flats; these are shallow regions in oceans in areas like the Caribbean.

Did you know that fly fishing is termed the most beautiful style of angling?

It is because of the spectacular motion of casting the fly.

Who can Fly Fish?

As long as you can handle a fly rod and reel combo, get casting.

I have seen folks bring children as young as three or four to safe creeks and streams for the little ones to practice.

How old were you when you began to fly fish?

I began to fly fish at ten and caught my first trout at the same age.

Today, all genders can fly fish and women like Katie Cahn, Cassie Spurling, Jen Ripple, Abbi Bagwell, and the likes are revolutionizing this sport.

I have a detailed article on Female Fly Anglers on the site that you can check out.

Most fly anglers indulge in the sport as a form of meditation.

Many regions worldwide practice it as catch-and-release to secure a decent population for the coming generations.

The History of Fly Fishing

The origin of fly angling dates back to ancient Rome, where men tricked and caught fish using red thread.

But unlike fly fishing, Tenkara has no reel.

The first fly fishing book was published towards the end of the 15th century.

It was called The Treatyse on Fysshynge with an Angle.

The first fly angling clubs emerged in the 19th century in Britain, and writers started publishing more books on the art of fly tying and fly fishing techniques.

At that time, anglers fished more in rivers like Beaverkill for brook trout.

There was a second wave of the boom, followed by the innovation of synthetic lines and fibreglass rods in the 1950s.

Fly fishing has recently become more popular as an outdoor recreation activity cutting across all ages and genders.

One thing that has majorly contributed to the sport is the iconic movie by Robert Redford – A River Runs Through It, featuring young Brad Pitt.

Now that you know quite a bit about this beautiful casting form let me briefly explain the casting skills involved.

Remember, they are different from those used in regular fishing.

Fly fishing can be considered a style of casting the fly line instead of the lure’s weight.

Typically, the weight pulls the line from your reel when you execute the front motion of a cast.

In fly angling, the fly is exceptionally light to act like the weight of a cast.

Fly lines are weighed and heavier than regular lines, and you need to cast using the correct technique.

A loop forms and transports a fly to your desired position.

The angler whisks the fly line back over their shoulder in the most typical form and loads the rod with several movements.

Like its name, you only use one hand to execute the cast.

Overhead casts are the most standard techniques here, but some anglers interchange with underhand, single Spey or roll casts depending on the situation.

Double hand casting is sometimes referred to as Spey casting and is mainly practised on larger rivers.

This fly fishing style requires you to use both hands.

Long and heavy rods are crucial for this technique.

The caster doesn’t need any space behind them and works best where high banks obstruct overhead casts.

Today, there are numerous situations where fly anglers use double-handed rods for fishing.

Fish Species to Target on a Fly

Sounds interesting even before we dive into the section, right?

I know you must be thinking that you can catch any fish on a fly.

Good trial, but no!

Let’s see what to catch on the fly and where:

Most fly anglers indulge in this sport in freshwater areas.

Trout fishing is the traditional and most popular category.

Traditional fly angling in cold waters was primarily done in streams and rivers, but recent years have seen fly angling for predatory species like bass and pike become prevalent; hence Stillwater areas like lakes, dams and ponds are fantastic options to fly fish.

Apart from trout fishing, catching salmon on the fly using huge two-handed rods is increasing in popularity on the Atlantic.

On the western coast of the United States and Canada, steelhead and Pacific salmon are among species that anglers go after.

Fly fishing in saline areas isn’t left out, and the fun here is ten times what you think if you have never adventured in the salt flats.

Species caught in the salts are stronger and stage stiff battles that a passionate angler will enjoy if well prepared.

Apart from the Caribbean, some areas in the Indian Ocean are becoming hotspots for fishing on the fly.

Trout in the ocean?

There’s the seatrout, a migratory form of the brown trout.

Seatrout populates these regions’ coasts and is an enticing target for fly anglers.

Since this is an introductory post, I will briefly describe each category. Still, there are detailed individual posts on the site with recommended and alternative brands that you can check out.

Until this point, you should have discovered two types of rods that we have mentioned within the article – single and double-handed rods.

The past few years have seen the emergence of switch rods that try to blend single and double-handed fly rods.

Fly rods are divided into different groups depending on the casting technique, type of fly used with the rod, number of rod pieces, the construction material, and many other aspects discussed in a separate post.

You can go as crazy as you can about them, and like fly rods, they are categorized depending on their areas of use, arbor size, construction material, and much more.

Check out our fly reel buying guide for in-depth information on these buddies.

To give an overview: Most fly anglers categorize them depending on the species they are designed to catch.

For instance, pike and salmon reels, trout reels and robust reels for catching salmon and fishing in saline areas.

Fly lines also take the same direction of categorization and are the most crucial part of your tackle.

Your line MUST suit your fly rod; otherwise, it will be challenging to cast appropriately.

Single-handed fly rods often use integrated fly lines where you seamlessly connect a head to a running line.

Shooting heads are becoming the standard for double-handed fly rods, but nowadays, some anglers use single-hand rods.

For you to tie a fly to your line, you need a leader material or a tippet.

This is a piece of monofilament usually between 6 to 8’’ long.

Depending on what you are targeting, it has a larger diameter and is thus stronger.

I have briefly covered flies, but a detailed post should be on the site for you to read and see how broad this topic can get.

My interest in fly fishing is deeper than you think, and I can keep writing until daybreak but wouldn’t be anywhere closer to summing things up.

Now that you have a brief intro to fly fishing, I hope you develop more interest in reading, learning, and practicing more!