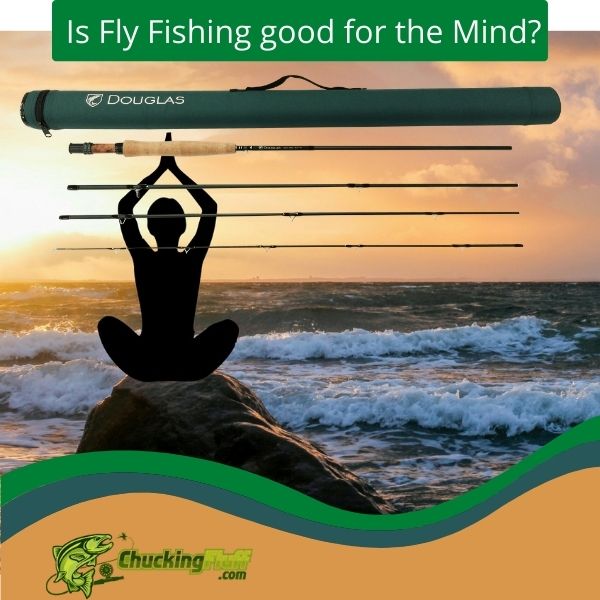 A lot of people who don’t or don’t intend to kick-start fly fishing are unaware of this. Putting that fishing combo into use is therapeutic. It is powerful how we can heal each other through water activities.

It has saved many lives. There are a plethora of ways to battle mental health. Among them there is goat yoga, bird watching, golf, and soever.

Millennials often were excited about packing on journeys to watch exotic birds. It mightn’t be sensible to others but many did. Fly fishing is gaining popularity with all ages and genders and has benefits to a healthy mind.

We have seen fervent anglers who are also physicians coming up with resourceful publications on fly fishing and health. It is more to it than fish-eating.

James A. Hensall for instance, confirms the solitariness that comes with throwing a fly, hooking on a game, battling it, unhooking, releasing it so you can come after it a fortnight later, or have it on your grill if you prefer.

In a publication by World Health International on December 4, 2019, over 264 million people suffer from depression globally. This cuts across all ages and genders. The figure is devastating!

Meanwhile only in the US, over 38 million people are into fly fishing and the figure grows steadily. About 200 million people go fishing at least once annually worldwide.

The difference between the global number of fly fishing participants and that of the depressed is huge. We need to indulge more in fly fishing or other angling to rescue the figure.

So does Fishing involve the brain?

All anglers, whether beginners or pro are brain-workers. Society might object to this but you wouldn’t understand unless you hit the waters.

On the gurgling rivers, along their banks, right on the shadows of canopies, on the rocks near great lakes, they all bow to their bodies and relax their beat nerves and weary muscles.

With them is a magic stick with an imperceptible leader, and a favorite fly.

It is a quiet sport-literally as it sounds!

Like a game of stealth and strategy, there have been many remarks of people breaking from the chains of stress and depression through the incantation of the fly and rod, rivers, and nature.

While everyday thinking is necessary, too much is treacherous. Breaking this train is vital. Fly fishing does it. The continuous rod and reel combo motion is therapy.

Your attention is on the position that the fly is going to land. Haven’t you escaped your daily thoughts? It doesn’t have to be complicated-of course, we are running away from the complications!

Maybe a little on how dumb these fishes can be. Using artificial flies for fishing is taking over the angling sector. Fairylike, they don’t perform fairly. They are exemplary.

As you throw your snare, some sought of a seduction process happens in the water. The fish develops an attraction, it gets madly engrossed by the pretty and catchy color of their intended trap-but do they know?

It comes right at it ready to have a mouthful, gallop that tiny thing like it deserves a warm place in a fish’s belly. Unluckily as it widens its jaws to complete the dreadful mission, the guy just got caught by a hook and it might be a goodbye or resend after a few seconds out.

What could it be?

Is it the serene and lush surrounding that kicks out a day’s stress, the aesthetics of the purling water, the rhythmic reeling, or the fish’s naivety? All in all, the results are detaching and good relaxation.

Fly fishing is good for everyone. You don’t have to go knee-deep in streams, rivers, or lakes. You can kayak or be by the shores and steadily catch a rising trout. The experience wherever is calming for the mind.

Henry David Thoreau says that many buddies head out fishing almost all their lives not knowing that they aren’t after fish. This mystery is now unraveling.

It is to unburden the brain and ease the mind from bondage. Neurobiologists confirm that you mustn’t have a neurosurgeon’s appointment to deduce that angling is excellent for you.

Everywhere you can find a read, the negative physical and mental impacts of daily stress in the current society have been documented. The same neurobiologists have discovered the relaxation response.

This is precisely the decisive initiation of a physical form of exclusive rest. In this case, it converts an individual’s emotional and physical response to stress.

Is it a form of meditation?

As many are in pursuit of relaxation, they opt for other activities like bird watching and yoga. For its contemplative state and repetitive angling motions, Harvard neurobiologists compare angling to yoga and bird watching.

You seclude from the real world get right in the middle of Mother Nature and stay away from phones and such devices. Though some tag theirs alone, it is solely for snap taking and documenting sessions.

We can compare it to meditation. The task, once you learn the skill and develop it, becomes simple. So you perform the casting task repeatedly and can go hours.

The fly fishing motion is inclusive of the activity and highly contributes to the calming effects. If over 38 million Americans are taking up angling as a means of relaxation, stress reduction, and anti-depression measures, what are the statistics worldwide?

Neurobiologists are linking the positive effects of fly fishing for the brain to greater improvements in sleep too. Thinking that fly fishing is only for the fun aspect is wrong.

You’d rather go out fly fishing on a weekend rather than stay indoors doing house chores. Remember, it is for your general health.

Immediately you notice coercions to your well-being, you trigger the stress response. This counter mechanism places human beings at an edge when they face precarious situations.

They mightn’t be drastic like in decades ago where you could be susceptible to injuries and death.

Nowadays most people are drowning in the stresses of joblessness, financial turmoil, domestic violence and divorce, and chronic diseases. While they are manageable, carelessness can lead to permanent damage.

These hormones stimulate the fight or flight reaction by tempering with some psychological processes. For instance, there is a shoot in blood pressure and heart rate.

Hypothalamus sends signals to the pituitary glands at the bottom of the brain. The glands release a substance that runs in the bloodstream to your adrenal cortex resulting in secretion of cortisol, which is a stress hormone.

At a glance, we can conclude that for short-term stress, this one is an excellent stopgap measure. Prolonged stress is precarious to the brain, body, and general wellbeing.

Sometimes the cortisol hormones rapidly increase and remain higher for longer. This harms your immune system making you vulnerable to illnesses and infections.

The result is a drastic reduction in brain cells, impaired memory, and other dreadful neural malfunctions.

Let’s say it is a prescription

They experienced a reduction in blood pressure in just two months of consistent fishing. 50% of the die-hards reported a decrease in their blood pressure medication dosage.

It is a natural stress reliever of its own kind. If a navy combat can drop their gun for a fly and rod, there is certainly no type of stress that fly fishing can’t counter.

Neuroscience is golden and its way of research enables biologists to deduce both natural and artificial ways of making the brain healthy again.

More into Neuroscience – Do you know what Dopamine is?

The study of the brain is complex. However, it is the heart of almost all body functions. Little dopamine is a powerful neurotransmitter. It makes you feel happy, confident, secure and fulfilled.

You need it. In fact, you should always crave it as a way to counter stress. It is easier to generate it within after a long session of throwing lures and finally landing a fish.

Even if it is a sardine, it is worth it. It dopamine rewards you.

Anciently, our great grandfathers found so much pride in catching fish. This meant that they’d feed their families. Some traditionally preserved and stored the surplus in order to break through another winter season.

Their bodies rewarded them as they felt great. This era of MacDonald Fries and burgers isn’t different. The brain function in the 80s and 90s is the same one to date.

There are no dynamics here. I know you will feel on top of a mountain to bag a large Farmington brown trout after a stiff battle.

The same way 14-year old Ivy Robichaux felt after landing a 188-pound tarpon that she caught off Louisiana’s coast.

Once you are hooked, it becomes a norm. If you stay a few days or weeks without a dose of this prescription you begin to suffer from an emptiness disease. It feels wistful because you miss it. Your brain misses this dopamine.

Briefly on the brain-soothing pointers

As one of the fastest-growing stress-relieving sports, fly fishing will need you to live within the moment yet long for another similar session like it.

You will love to live in the long stretches too. Here are a few things that you didn’t know fly fishing can do:

Must you throw a lure to feel better?

For some people, it is the casting art from which they derive relaxation. The motion of the line is soothing to them. Trying to whip out into the right spot is another. As they swing into action, they also enjoy watching others play with their sticks.

There are the fervent fly tiers who focus more on making and tying flies than fishing. When they fish, they are simply putting their flies to test.

Are they a sure bet? Do they fall apart? Does it strike? If it does, that’s pretty cool. If it doesn’t, they head straight to the tying board.

Their minds juggle between finding the right colors of thread, identifying the perfect insects, and finalizing the product.

Others are trophy fly fishermen. They pride in catching trophy fish. As they head out with their combos, they aim at fish that they’ve never seen and caught.

They always pray that Holy Mary sends a big one their side.

If you think that the point of fly fishing is easy and straight, you are yet to meet it in its complexity. Fishermen are a unique breed.

Have you ever seen a mad angler? The hook might strike your eye before you vent your anger on the water. As you need more concentration, you need a smile since it is difficult to cast continuously without a smile.

After having a session with you fly fishing companion-your combo, do you consider it therapeutic? Other than just having fun, do you feel relieved from a bad and stressful day?

We’d like to hear from you about what it feels like to fly fish. While many think that being a fisherman makes you a truer sportsman, in real sense it doesn’t.

Anglers will confirm that retaining sanity and mental health after a tough season is crucial. Your fly fishing combo is your drug take it with lots of water.

Embrace the new yoga and fish your way to happiness!