Polyleaders were developed originally by Airflo UK to help with casting turnover. Before they were developed hand made tapered leaders was probably the best way to get the energy from the cast to slow down to present the fly gently on the water.

However homemade tied tapered leaders don’t start with the same profile as the end of the fly line and can hinge when casting which is disastrous to your cast. That and the addition of extra knots into the fly leader setup makes for more problems that can occur. For a cast to be presented well you want it to unfold in the air and straighten out into a nice line as it lands on the water so the fly normally at the end of the leader lands with a gentle plop and not a smash as most often happens. With this you are presenting your fly in a way that will not spook timid trout and will increase your catch rate which is what we all want. 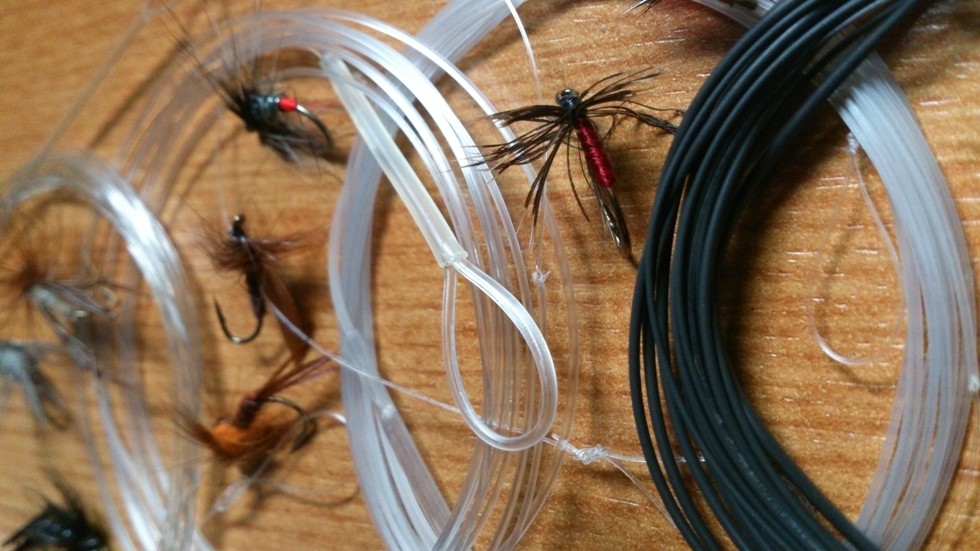 Polyleaders were designed on the same principle as fly lines consisting of a poly outer layer and a nylon core. They then measure at the thick end the same size diameter as the end of your fly line so the transfer of energy is smooth and the addition of ready attached loops makes the job of switching them a breeze.

Better turnover of the fly makes for better casts

On the other end of the polyleader the taper smoothly thins down to mimic the tippet material and so enables the transfer of energy to a nice smooth cast. In essence they become an extension of the fly line itself. This enables better turnover of the fly for gentle casts. The extra addition of polyleader densities allows the changing of a full floating line to a slow medium or fast sinking action very quickly. This allows the fly angler to cover more water conditions on the same setup without the need to change fly lines or rods.

When fly fishing with a full floating fly line it is always advantageous to have polyleaders of different densities to enable you to fish different depths without having to change the whole fly line. Poly leaders come in different lengths, strengths and densities so you can choose the ones which suit your setup the best. For instance when fishing for trout you can use 5ft to 10ft leaders which are made light and have a breaking strain of around 10lb. On the upper scale you can get polyleaders 14ft – 20ft and have a breaking strain of 30lb plus.

Typically I would use 5ft leaders for trout and either 10-14ft leaders for salmon. However when stuck I have added polyleaders together 5ft+10ft=15ft to help get a fly down quickly in fast water if I didn’t have the correct density to hand. No situation is perfect and it can be all down to how you adapt your cast to present a fly to a salmon or trout in a certain depth of water as to which polyleader you use.

Polyleader density, how fast do you want it to sink?

Starting at the top we have a neutral density polyleader which floats or hovers just under the surface. Then we have Intermediate which will sink at a rate of 0.5-1.5in per sec. Next is Slow sinking 2-3in per sec, Medium to fast sinking 3-5in and extra fast sinking from 5in and over. These different sinking rates allow for getting the flies down at different rates to the feeding fish.

Polyleaders in my opinion are great for nymph and wet fly fishing when your fly is under the surface of the water, however for dry fly fishing I find there is no real need for polyleaders and a normal tapered mono or co-polymer leader is fine. However I do find the full floating version of the polyleader great on streams or rivers in fast flowing water when you want the fly to stay afloat as these polyleader stays on top on the ripple and not through it as leader material would. 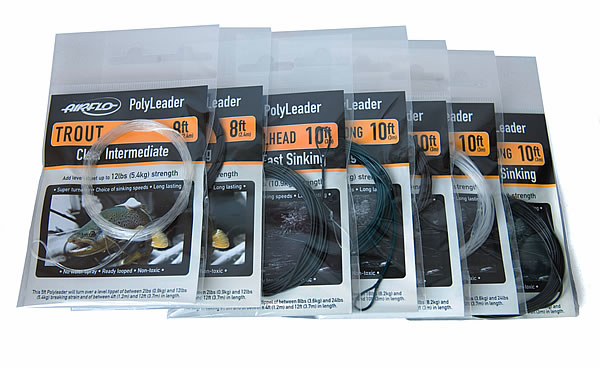