Skip to content
HomeHints and TipsBarbless hooks, are they good for fly fishing?

When I first started fly fishing all those years ago there was no such thing as barbless hooks for trout fishing, well not that I noticed anyway.

Most of your catches were kept back then however as time has progressed things have changed.

It is now more the norm to release your catch back into the ecosystem you caught it so future anglers will hopefully have the pleasure of partaking in the sport.

The only thing that wasn’t kept back thirty years ago was small undersized fish that were deemed by the fishing agencies to be returned.

When I think about it, some of the small trout I caught back then went back bleeding and probably swam off to die.

Well, I was only starting out back then and didn’t know anything about barbless trout flies.

All the flies I tied were on fully barbed hooks as this was the norm. So my question is; barbless hooks are they good for fly fishing? Let discuss to see the differences.

Many tackle changes over the last thirty years! 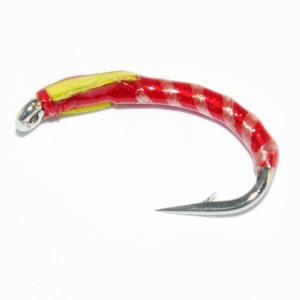 Fly fishing in general has undergone many changes over the last thirty years.

Tackle improves every year. Fly rods are much stronger and lighter, same with fly fishing reels.

Fly lines are now made with poly-coated layers with braided cores and the terminal tackle, the flies, are now made with chemically sharpened points hooks. To top this off barbless trout flies now are more common.

The barb when first conceived was to hold the fish in place so it could not fall off the hook and escape.

This was very important back when things got started as fishing was more of a necessity for feeding the family than a sport as it is today.

The barb was made with a slit made cut into the hook and pulled out from the wire body. As the fish was hooked the flesh would not be able to slide back off as the barb would hold it in place.

Either that or the flesh would be torn and leave a hole if forced too much.

“Check out some of our other Buying Guides”

Flies are dangerous and can sink in deep!

This is the same for catching yourself or your buddy with a fly, as a barbless hook can be slid out without too much hassle or pain, were as a barbed hook will be painful and leave a scar if pulled straight back out.

What is normally done is the hook is pushed round in a curve to protrude out the other side so the barb can be cut off.

Barbless hooks were brought into existence to aid catch and release tactics and leave the fish relatively unharmed as it swam away.

In fact, a trout for instance can be shaken off a barbless hook without having to remove it from the water at all.

This can be done fairly easily once you know what you are doing so it is then not handled and is not stressed more than required. 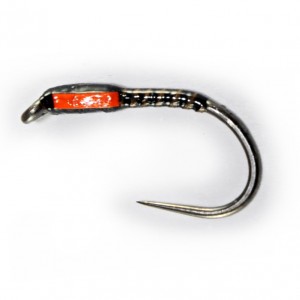 Some fly fishing anglers who grew up with the old barbed hooks and the plan to kill all they caught are mostly put out when asked to use catch and release tactics, as it’s a new way of fishing to them.

There is a lot of complaining that the hooks are not good enough and fish will get off etc etc.

At the end of the day, we all want to land our trout for picture opportunities and to give us that satisfaction of actually catching your prize so some do not like the fact that occasionally fish or trout will get off.

However, I have seen this happen with barbed hooks too so I am not convinced that it’s down to the way the hook is finished but the way the fish is played.

A great tip I picked up when using barbless hooks is to twist the hook point a few degrees to either side to make it sit slightly off the straight.

This for me not only aids in hookups but helps me land more trout also.

I find that when I am fishing barbless hooks which is basically all the time I occasionally lose the odd one but if I keep constant pressure on the trout and play with tension I can usually land more than I lose.

I do not think the removal of the barb has dampened my enjoyment of fly fishing and the fact I can release trout and salmon without harming them too much so they can live to fight another day is more important to me than losing the occasional one.

Some of our Readers Remarks on Barbless Hook and their Uses

Colin Said, “Barbed hooks for sure, I am convinced more damage occurs to the fish with barbless ‘tearing ‘ lip splitting etc. I also fight my fish hard so when returning they still have some energy left and are not half dead when landed”

John Said, “I definitely agree to barbed or semi barbless hooks on trebles because of the fact when a fish such as a pike thrash around the hook is set and stays but without the barbs, it’s able to unhook and set itself in multiple places, I’ve tried the barbless trebles and by the time I got the fish in a part of its bottom lip was hanging off and you could clearly see where the had moved around, the damage was far more substantial than what would have been there having barbed hooks.”

Niall said, “Barbless are useless in my opinion, if you hook a fish you want to land it!!!”

Harold said, “barbless hooks are great for catch and release tactics, but the one time I used them (I took some by accident from the tackle shop I was working in) I lost more bait than fish.ps the owner said I could take the new tackle and try it”

Franc said, “first of all, I don’t fish for pike with or without dead bait.

However, having fished international and World fly fishing championships where barbless is the law, I still prefer a fly with a barb.

Chances can be few and far between when fishing so a tiny barb helps land a fish. At least 98% of my flies have barbs.

For your information, here in Scotland, on the rivers I fish for salmon, your flies/lures have to be de-barbed from the beginning of the season, typically January or February, until June 1st and all fish returned.

(these rules do tend to change according to catchment) in an attempt to increase runs of Spring salmon by returning them.

As you might expect, this is a move that’s not always appreciated by every angler, especially those who have been paying for expensive beats for many years in the past and were allowed to take everything they caught.

John Said,” As an angler who fishes for the pot, I prefer barbed hooks. I not a sports fisherman as I don’t see the point. I mainly fly fish which allows me to release any fish I deem too small for the pan”.

Ken said, “Whilst I did specialize in all forms of pike fishing many years ago, before the advent of the preferred use of barbless hooks, I have given this a fair bit of thought and can see the distinct possibility when using a snap tackle set up, of one hook managing to come loose and fly around whilst the second hook is maintaining a hold.

This “flying” hook is then likely to find a hold on the fish elsewhere and may indeed come out again, (or the other hook do the same) and the process could repeat itself several times!

This would undoubtedly result in unnecessary damage to the fish. Assuming this to be the case, I think that micro barb/semi barbed hooks may be the answer. Just allowing the hook(s) to remain in position when set.

Where caution has to be applied is when the undue delay to the strike takes place and the fish is deeply hooked. Something we must avoid. I never did delay the strike for more than a couple of seconds.

One can usually detect when a pike has turned the bait and the strike should be no later than this.

I would rather a fish be lost than be seriously injured as a result of being deep hooked.I have caught many 25lb plus pike and one well over 32lbs. (That was the heaviest my scales could register !)

Most of these fish were, in fact, caught on barbed hooks and not one was deep hooked.”

Pudz said,”Without a doubt, barbless hooks are much better for most species but for some species, they are not good.

This is why I would never support a fishery banning all barbed hooks.

I saw the damage they cause first hand when I lived in England for a few years. Barbless hooks have their place but so do barbed hooks.”

I want to be able to see future generations fly fishing as I walk my dogs along the waterways knowing I did my bit to help that happen. I would really hate it if we were to totally kill off sport species in waterways just to satisfy our blood lust for a sport that doesn’t warrant it.

Let’s face it we can all go to the store and buy our fish for dinner whenever we want to help the local economy and keep our fishing spots for another day.

What do you think, are you a fan of catch and release tactics? Do you think barbless hooks for trout fishing make you lose more catches? Do you have a favorite hook brand that works better for you? Please share in the comments section below.